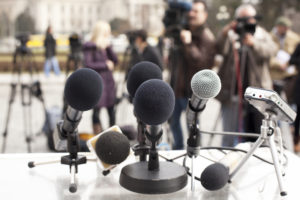 Every day, newspapers and social media deliver fresh examples of poorly conceived and badly executed public statements that impact a legal position. As a result, lawyers and communications professionals who pay attention are being treated to a master class on how uncontrolled and undisciplined public statements can tank a case.

The communications missteps we have witnessed in recent months remind us that what is said in the public record – including on social media – can and will be used against the client in a court of law. The Trump campaign’s Twitter statements were used as evidence against the now-President’s travel ban in litigation. The White House’s statement explaining FBI Director Comey’s firing was undercut by the President’s contradictory statements about his motives, possibly inflaming the case for obstruction of justice.

But Washington is not the only source of examples.

CEOs and public companies routinely make misguided public statements with the potential to spill over into the courtroom. 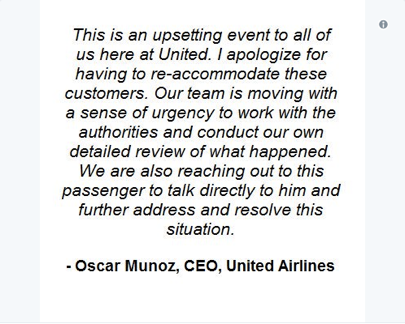 Who can forget United Airlines CEO Oscar Muñoz’s statement after security personnel were filmedforcibly dragging a passenger off a plane because the company needed the seat to send staff to another airport? Rather than offering up a sincere apology for the horrifying incident, he offered a non-apology for “having to re-accommodate” the passenger, whose face was bloodied during his “re-accommodation.”

And then there was BP’s CEO Tony Hayward, who offered an off-the-cuff comment on TV about the deadly Deepwater Horizon explosion and oil spill in 2010. The catastrophe destroyed hundreds of miles of beaches, decimated scores of wildlife and killed 11 workers, yet Hayward responded with: “We’re sorry for the massive disruption it’s caused their lives. There’s no one who wants this over more than I do. I’d like my life back.” Following his statement, the U.S. government came down on the company like thunder and Hayward was ousted from his job within months.

Advice for Lawyers and PR Pros

In light of these and so many other examples, I offer a few points of advice to lawyers, communications professionals, and others concerned with making sure that public statements support, instead of undermine, their legal positions.

Most legal problems have a long lead time, or the nature of the problem is easily anticipated because of the nature of the business (e.g., it’s a safe bet that a fast food store might be subjected to a robbery, although the timing of the event is unpredictable). If you can see a legal problem coming, it’s time to think through your communications strategy about it. If you don’t have an experienced public relations professional in-house, bring in an outside consultant. Your PR team and your legal team should work together to draft a plan that is sound from both the legal and public relations standpoint, before the lawsuit is ever filed.

Focus on getting to, and stating, the Truth.

This one is essential. If you can’t prove it in court, you shouldn’t say it outside of court. Trial strategies that aren’t built around the truth, or are built around weak versions of the truth, are destined to fail. But it takes time to get to the truth, which is where a too-quickly executed PR response can sometimes fall down. As experienced trial lawyers know, what seems to be a defensible position based on top-line managers’ perspectives can be dramatically impacted by what is discovered when you talk to firsthand witnesses and read the emails. That is why advance preparation is so key: it gives the lawyers and the PR professionals time to come to grips with the full picture.

If you’re wrong, apologize sincerely. And make it right.

Insincerity and callousness in the face of a tragedy or avoidable chaos are like a red cape to a bull. Apologies that come across as “I’m sorry if you were offended…” enrage your legal adversaries, and jurors don’t like them either. Use of sterilized language – e.g. “re-accommodate” — in an attempt to deflect blame is just as bad. And the best apology in the world won’t matter if a company fails to rectify its actions.

Keep your spokespeople in the loop.

Make sure anybody who would be called on to speak about a particular subject knows the company’s position. This includes not only official company spokespeople, but also whoever is staffing its social media accounts. And remind all staffers – from the receptionist to the mailroom – where media requests should be directed. Only those who understand the entirety of the issue at hand and are fully briefed on what is and isn’t advisable to say to the press should be allowed to go on the record. Even innocuous statements can cause legal problems down the line. Discipline is key!

Legal and PR need to realize they are on the same team: the client’s.

If the legal team (both in-house and outside counsel) and the communications team aren’t working together, it’s a recipe for disaster. This isn’t always easy. Professionals from both sides of that fence often observe the other as the enemy or, at the very least, people whose job it is to make their own jobs harder. But when a public relations problem becomes a legal problem, or vice versa, both teams need to be working together closely and harmoniously.

As a trial lawyer who also counsels companies about crisis communications, I have seen attorneys and public relations professionals work together brilliantly. And I have seen them come close to blows. Here’s how to achieve the former:

Convince the public relations team that the legal ramifications of all public statements must be considered up-front. There should never be any surprises for the legal team about what the communications professionals and company spokespeople are saying, and vice versa. This means vetting statements before they go public and considering the PR implications of legal filings before they are submitted in court.

THOU SHALT RESPOND IMMEDIATELY to a communications need. When reporters and the public are looking for answers, you don’t have time to think about it for a week. Review any draft of a public statement the minute you receive it, and consider the viewpoints of all the stakeholders who will read it. Do not prioritize avoiding all legal risk over the need to communicate effectively and promptly with the business’ many stakeholders. Doing so only creates new, and sometimes larger, risks in the court of public opinion.

Know where you’re trying to go. Is the litigation your client’s biggest risk, or is there a compelling business need that’s greater than the litigation? It is crucial to make sure every professional in the legal, communications and client loop knows the answer to that question. Every lawyer with a $1 million case is tempted to think that their case is the most important risk. But, for many companies in many situations, the need to communicate with stakeholders and customers promptly and effectively is much greater than the outcome of one lawsuit.

Conversely, a small business may just want to keep its head down and continue with its normal marketing and PR activities, not appreciating that a bet-the-company lawsuit requires a dramatic change in strategy. Even if the business takes a short-term hit, it may be more important to be on a firm legal footing.

Keep your communications team advised of upcoming litigation events and accept their feedback on what litigation steps may matter to other client stakeholders. For example, in Texas you may want to name a non-party as a potentially responsible party. The PR team needs to know this is coming, even though it is a routine procedural event. A reporter following your case may see such a filing as “blaming other people.” A PR professional who has to answer that call would be rightly upset by not having advance notice and an opportunity to prepare.

In the era of the never-ending news cycle, information moves fast. And when there’s a high-profile legal controversy, public statements can have long-lasting legal ramifications. There’s no need for a misguided public statement to derail a solid legal plan, just as there’s no excuse for your spokesperson to learn about a court filing from a reporter rather than the legal team.

Preparation, communication and a mutual respect for everyone’s individual roles are what will lead to success.