Author’s Note: On the one-year anniversary of our trial victory for T. Boone Pickens and Mesa Petroleum Partners, I am sharing an interview with one of our key expert witnesses, Ricardo (‘Rick”) Garza. Rick was an amazing person and loved to share his knowledge of petroleum engineering with lawyers and juries. I am very sad to report that Rick passed away on October 27, 2017. He will be terribly missed.

As any good trial lawyer knows, the success of your case is greatly affected by your team, including co-counsel, local counsel, paralegals, jury consultants and expert witnesses, among others. I have had the pleasure of working with Ricardo Garza, one of the best engineering expert witnesses you’ll find anywhere, most recently during a 3½ -week trial in the West Texas town of Pecos. Our team represented Mesa Petroleum Partners LP in the hotly contested case involving oil and gas investments.

That trial ended with a unanimous $146 million jury verdict on behalf of our client, and Rick’s expertise contributed to that impressive win.

A petroleum engineer for more than 40 years, Rick has been an expert in hundreds of lawsuits and has participated in more than 50 trials. I  sat down with Rick to get his insights about trying a case when the subject matter is, to put it lightly, complex. The answer, it turns out, is equal parts expertise and arts & crafts.

How do you explain complicated engineering concepts to a jury?

First, I try to learn all I can about the jurors – their backgrounds, their jobs and their educations – so I know who I’m talking to. It’s very important that I present my information in a manner such that the jury doesn’t conclude that I’m talking down to them. 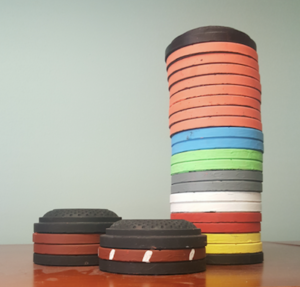 Still, these are difficult concepts, so I find that demonstrative exhibits are the most helpful. I spend a lot of time at hardware stores, arts supply stores, even gun stores figuring out how to build demonstrative aids that will help jurors understand technical issues. For instance, when I needed to explain the difference between the resource plays in different geographic areas of the country during the Mesa case, I used sporting clays, the kind you shoot. I needed to show the difference between the plays in the Delaware Basin, the Bakken in North Dakota and the Eagle Ford in South Texas, so I color-coded multiple clay pigeons and used one clay pigeon to represent the thickness of the Bakken interval, two to represent the thickness of the South Texas Eagle Ford interval and 20 to represent the much greater thickness of the Wolfcamp and Bone Spring formations of the Delaware Basin. (See photo at right)

The jury quickly understood what I was saying and it was much easier than if I had used geologic maps, which can make jurors’ eyes glaze over. But the jury will get it, as in the case of the clay pigeon models, or if you go to an art supply store to purchase some foam board and modeling clay to build to scale a 3-D model with wells located in all the right positions that correspond with the geologic map at issue. I find that this is usually preferable to using video, which has the tendency to make jurors sleepy. With an accurate factual model done to scale, they get it and it works. 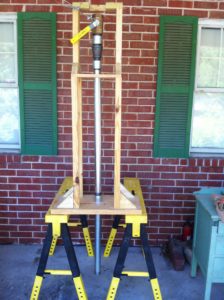 Replica of tubing and valve components in Mississippi case.

Another case I remember was in Mississippi. A valve had come loose from tubing suspended overhead in the elevators on an onshore workover rig and severely injured a contractor on location. I used wood to build an exact replica of the actual tubing and valve components involved in the accident to help show the jury how the valve became unscrewed and then struck the contractor standing on the ground approximately 30 feet below. (See photo at left.)

I probably shouldn’t have placed the model so close to the jury box, though, because when the valve fell, the jurors in the first row jumped out of their chairs. (For the record, the loose valve was strongly secured with a sturdy metal cable so that its fall was arrested after a few inches, a feature I tested multiple times when practicing prior to the actual court demonstration.)

Also, I always run my court exhibit presentations by my wife because she’s always honest with me. If she doesn’t understand the point I’m trying to make, she’ll simply say “If you can’t explain it to me, it means you don’t understand it.” That’s what I think about when I prepare models to present as demonstrative exhibits in court to explain complex technical issues.

What can a lawyer do to help you explain concepts to a jury?

It’s always helpful when a lawyer has an engineering background (like you do), but that’s hard to find. Mainly, I like working with a lawyer who will spend time with me to make sure he or she understands the science behind the case.

It’s also easier to work with a lawyer who doesn’t insist on sticking to a tight script. I’d rather work with general outlines and the major points that we need to get across. When you’re working off a script, it’s too easy to get thrown off when something unexpected happens.

What makes a good trial lawyer?

One of the most important things is to be a good poker player so that you don’t overreact to what happens in the courtroom. Also, be respectful but don’t be a pushover. I’ve seen lawyers get very abusive, especially with expert witnesses, and juries definitely don’t like that. They don’t like abusive attorneys, but they also usually don’t have a very good opinion of any expert witness who comes across as a pushover.

But the most important thing is that the lead attorney needs to realize that he or she is the leader of a team, particularly once they make it to trial. You have a whole team of people – paralegals, appellate lawyers, local counsel, and others – and they’re going to be together for weeks, so it’s important that they work together as a team.

The best lawyers will schedule a team meeting at the start and end of each trial day to make sure everybody has their assignment. If the lawyer doesn’t do that, things start to fall apart after a few days, things get missed, and it’s difficult to get all the work done. It’s a separate function from being a lawyer and it doesn’t come up during the trial prep. I’ve been in trials where the lead attorney was an excellent trial lawyer but a poor leader who failed to get the team together and keep it together to get the job done. The lead lawyer, as the team leader, should be like the captain of the ship making sure the boat is always proceeding in the right direction and gets to where it needs to be at the end of the voyage.