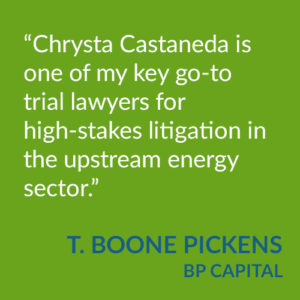 Dallas trial attorney Chrysta Castañeda and The Castañeda Firm have been recognized on Texas Lawyer’s list of the Top Texas Verdicts & Settlements of 2016 for the firm’s multimillion-dollar oil and gas verdict for legendary oilman T. Boone Pickens and his company, Mesa Petroleum Partners.

The state district court verdict in Mesa Petroleum Partners LP vs. Baytech LLP was the fifth-largest in Texas in 2016, according to Texas Lawyer, which ran the list in its September issue.

Baytech LLP and Delaware Basin Resources LLC, both of Midland, Texas, and Dallas’ J. Cleo Thompson were ordered to pay more than $145 million to Mesa by a Pecos jury for breaches of contracts covering the Red Bull play in the Delaware Basin.

“This case had several challenges, but we knew from day one that Mr. Pickens was wrongly excluded from his fair share of a valuable deal that he had honored completely,” Ms. Castañeda says. “This case emphasizes and validates important legal rights, and we are proud to have been a part of it.”

The trial revolved around contracts that Mesa signed with the other companies in 2007 that required the companies to offer Mesa a 15 percent stake in any new oil and gas assets they acquired in the Red Bull area of mutual interest, covering portions of the Delaware Basin in the Permian.

Instead, as Ms. Castañeda explained to jurors, Mr. Pickens and Mesa were wrongly shut out of lucrative acquisitions by the other companies, in violation of the contracts.

The Mesa verdict was the 12th largest in the country in 2016, according to The National Law Journal.